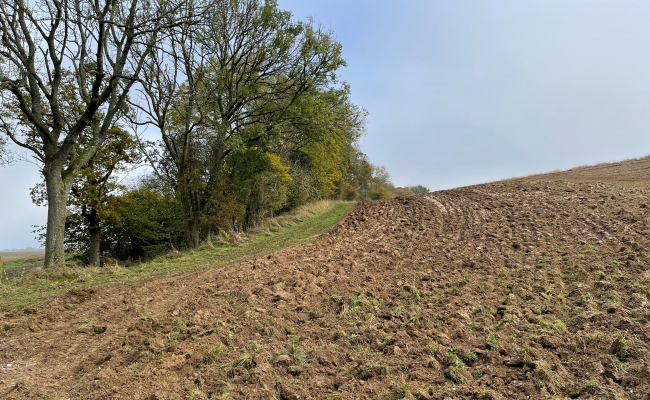 No-till farming, where fields aren’t ploughed, has become increasingly popular with the raised awareness of the importance of soil health and how carbon can be sequestered by soil. But this only shows part of the bigger picture. Whilst we do minimise the use of ploughing, reducing the use of farm machinery and the resulting carbon emissions, we also have to bear in mind that we are an organic farm and sometimes we do need to cultivate the soil to make way for planting!

We don’t plough our fields often though. The logic with no-till farming is that you shouldn’t disturb the soil so you can retain the soil structure. Whilst capturing carbon in the soil and increasing soil health is fantastic and exactly what we want to be doing, we also want to be able to grow crops and there are other ways to improve the soil. We never look at one thing in isolation – we’re all about the holistic approach so with our other soil friendly practises, we’re not negatively impacting by cultivating once in a while. Recently we have been ploughing the fields which have been undersown with clover. This is when we’ve planted clover amongst crop plant when its big enough not to be overwhelmed by the clover. Then, when the crop is harvested, the soil is still covered by the clover (a cover crop) and not left bare and vulnerable to soil erosion. As we plough the field, the clover is turned over and adds that organic matter back into the soil, increasing soil fertility to benefit the next crop. This also means that we’re adding organic matter deeper into the soil, rather than just below the surface. This is what we’ve done with the heritage spelt we’ve been sowing recently.

Whilst some farms will plough a relatively bare field and cause lots of soil disturbance, we believe that by loosely ploughing the clover into the soil and allowing some clumps to remain on the surface, we’re helping the soil and maintaining the mycorrhizal system too. The clumps of clover that remain after ploughing help with biodiversity. Another added benefit of cultivation is that some of the rare arable flower species are able to germinate after ploughing (where previously they were too buried) and these suddenly come to life. We’ve actually been advised that we should plough the field margins more to encourage these vulnerable arable species to flower!

For more info on min-till and no-till pros and cons, see this soil association doc